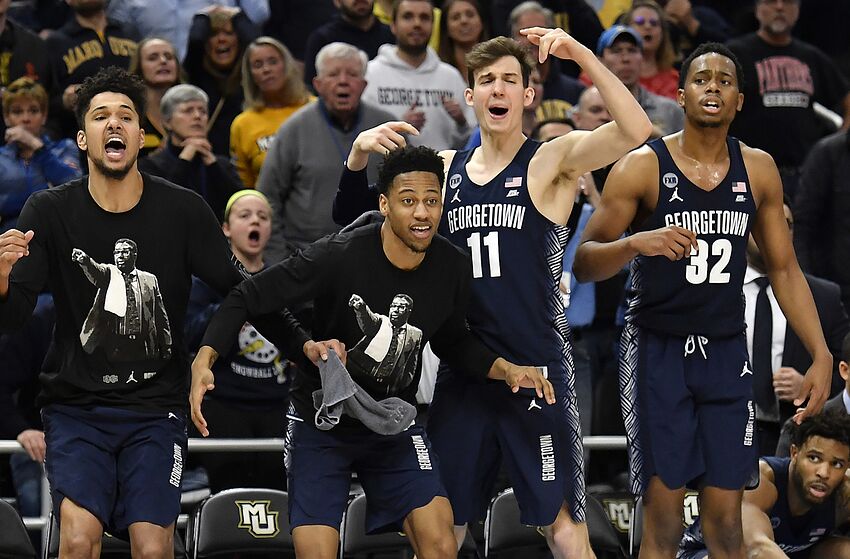 MILWAUKEE, WISCONSIN - MARCH 09: Greg Malinowski #11 of the Georgetown Hoyas and teammates react from the bench during the second half of the game against the Marquette Golden Eagles at Fiserv Forum on March 09, 2019 in Milwaukee, Wisconsin. (Photo by Quinn Harris/Getty Images)

Syracuse and Georgetown renew an old Big East rivalry; will the Orange get their season on track or can the Hoyas score another solid win?

Seemingly trending in the wrong direction, Syracuse (5-4) will enter this key showdown with some momentum, having walloped Georgia Tech 97-63 last Saturday in their most recent game. Jim Boeheim’s team has struggled against solid competition, with that win over the Yellow Jackets their only win away from home.

The star scorer for the Orange has been junior forward Elijah Hughes (19.6 ppg, 4.8 rpg, 4.0 apg). Hughes put up 33 points in that win at Georgia Tech and has really developed this season. Another name to watch is freshman guard Joe Girard III (9.7 ppg, 4.7 apg), a young stud who can put up points in a hurry. Sophomore guard Buddy Boeheim (14.1 ppg, 2.7 apg) can also be lethal from long-range.

Where does your fandom rank?

Across the court, Georgetown (6-3) has seen an up and down start to their season. They were dropped at home by Penn State and lost a close game to Duke, but took care of Texas and Oklahoma State in exciting games. The Hoyas are still figuring things out and enter this matchup on a two-game road winning streak.

A bright season seems to be upended by transfers, as the Hoyas will miss the services of sophomore guard James Akinjo (13.4 ppg, 4.4 apg). Regardless, there’s still talent on Patrick Ewing’s squad, headed by senior center Omer Yurtseven (16.3 ppg, 9.4 rpg), who already has four double-doubles this season. It’s also important to watch sophomore guard Mac McClung (15.0 ppg, 2.4 rpg), fresh off a 33 point outing in that win over the Cowboys.

Georgetown is 47th in KenPom and ranks 21st in offensive efficiency. They play quick but struggle with turnovers. The loss of Akinjo (and a few other players) will ravage their depth going into Big East play, but this team has a pair of solid wins already.

For the Orange, they need Hughes and the other shooters to make their shots, especially against a Georgetown defense that’s been suspect in stretches this year. For the Hoyas, they’ll need Yurtseven and the frontcourt to dominate in the interior, while also trying to control the pace of this game.

There will come a point when Georgetown is crushed by the loss of talent, but this is the kind of game that they can definitely win, especially at home. This Syracuse team has been inconsistent, but a hot-shooting effort could ignite them without a doubt. I think Yurtseven is too much for the Orange to handle and Georgetown squeaks by, though this game could certainly go either way.