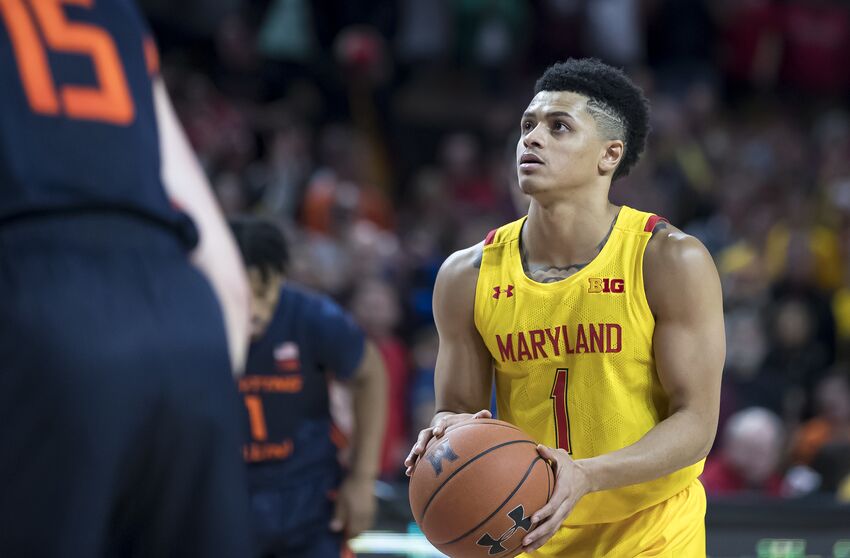 COLLEGE PARK, MD - DECEMBER 07: Anthony Cowan Jr. #1 of the Maryland Terrapins preparers to take a foul shot during the second half of the game against the Illinois Fighting Illini at Xfinity Center on December 7, 2019 in College Park, Maryland. (Photo by Scott Taetsch/Getty Images)

Arizona State Basketball: 2019-20 keys to upset Oregon in Eugene by John Vaccaro
UNC-Willmington Basketball: Is C.B. McGrath in danger of losing his job? by Hunter Moore

After the loss of Mitchell twins to the transfer portal, Maryland Basketball needs to go back to the basics and find their rhythm again.

Maryland Basketball is one of the most confusing teams in college basketball.

The Terps (13-3, 3-2 Big Ten) are right in the thick of things in the conference, but man are they unpredictable.

One night, everything is clicking in a convincing home win against Ohio State. Three nights later, they are blown out on the road to an unranked, injury-riddled Iowa team on national television.

Something needs to change in order for this team to make any noise come March. And it starts with head coach Mark Turgeon.

If there is one major thing that has been obvious to college basketball fans everywhere regarding Mark Turgeon’s coaching style it’s this:

Anyone who has paid attention to Maryland during Mark Turgeon’s nine seasons at the helm knows that he is more successful with fewer pieces at his dispense. The departure of twin freshman forwards Makhi and Makhel Mitchell should force Turgeon to utilize his talent in a 7 or 8 man rotation.

Instead of attempting to find playing time for both Mitchell’s in an already minute-hungry core of players, Turgeon now can play the best possible players at all times.

In the four games that have been played in 2020, the starting lineup and rotations used have benefitted the Terps, resulting in three wins. But it needs work.

Starting Anthony Cowan Jr. at point guard is a given. The man has started every game since he has arrived on campus in 2016. It’s the wings on this team that are almost interchangeable and can be switched based on who is hot and who is struggling.

Darryl Morsell is someone who brings intensity on both ends of the floor and should be a starter for the remainder of the season. What he lacks in on offense he more than makes up for on defense, becoming the “glue guy” for this Maryland team.

“Darryl Morsell is a tough dude. He’s the guy that gives everybody on the team confidence that he’s with you.”

The same could be said about freshman Donta Scott, who has been a pleasant surprise for this Maryland team. The 6’7″ forward from Philadelphia came into the season as a bench option who got occasional minutes, but man has he blossomed into a key piece for this team. He is a gritty performer and does all the dirty work that is asked of him.

On the other side, there are some players that need to find themselves in order for this team to be successful.

After his first career scoreless game against Iowa on Friday night, something needs to change.

He already was someone who was struggling to shoot this season, averaging below 30% from three, but something about his play just seems off. Lazy passes, lack of court awareness, and poor shot selection are just a few of the reasons why he and this team struggles so mightily at times.

Wiggins has as high a ceiling as any player in the country, but it’s time he starts playing like the NBA-caliber player we all know he can be.

Rounding out the starting five is none other than Jalen Smith. The 5-Star sophomore from Baltimore has really worked on his game as the season has commenced, scoring 19 against Indiana and knocking down two huge threes against Ohio State, along with playing great defense. But he needs more help.

How far this Maryland team will go will be based on the performance of these five players, as well as their bench production. What Turgeon needs to do in order for this team to be successful is limit the number of players that get significant playing time.

The five players mentioned should get the majority of minutes in crucial games, with help from two major guys.

Ayala is a guy who has been hot and cold this season.

He started out the year playing extremely well basketball, coming off the bench as the sixth man and thriving in his role. But since mid-December, his game has looked more lackadaisical and sloppy. Once he cuts out the turnovers and frantic drives to the basket, he will be able to really help this team succeed.

For Marial it’s simple. Play him in short spurts at a time, let him dictate the paint for a few possessions and use him as a decoy. Even playing Jalen Smith alongside him would make them a very difficult tandem for any opposing team to stop.

The only other players that should get any minutes should be Serrel Smith Jr. and Ricky Lindo Jr. These two have the ability to fill in for short amounts of time and could provide enough energy to be productive.

Other than that, Mark Turgeon should not go any further down his bench than he needs to. His team can reach the Final Four or beyond if they can just play with more urgency and desire. The blueprint for winning is right in front of him and it’s up to him to see it.